THINGS THAT MAKE YOU GO HMMM... 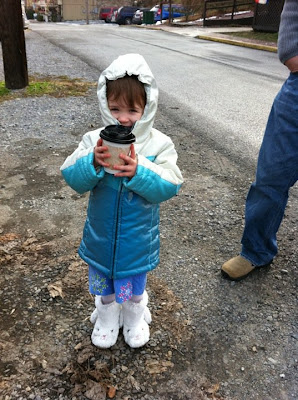 Great idea. Let's go grab a decaf for me, a hot chocolate for you and do just that! Wanna know what our chat was about? I'll give a hint. It revolved around a beautiful Christmas card we received from a friend of mine. I taught with this friend when I first moved here 12 years ago. Three years ago my friend had triplets. Let me tell you, if I could pick any one of my friends to have triplets, it would be her. Organized, fun, and creative does not even begin to cover it. Anyways, I digress.


I opened my friend's card to be greeted with the beaming faces of her adorable triplets. I handed the card to Mags who asked me "Who are these people again?". I explained to her it is my friend, her husband, and their three kids. She smiled. Took a sip of her hot chocolate and the conversation began:


"Awww, these kids are so cute, Mama! I like their dresses! Your friend has three whole kids?" I giggled a little. "Yep! Plus, you want to know what is so special about my friend and her kids?" She shakes her head vigorously as she is sipping. Sipping...er...spilling. I hand her a napkin and while she is wiping her face, the table and her shirt I explain it to her. "My friend grew all three of those babies in her belly AT THE SAME TIME!" In her typical dramatic fashion she slams the cup on the table, drops her mouth open and says, "NO WAY! They all fit in her tummy together?" I go on to tell her how some Mamas' bodies grow more than one baby at a time.


Then the questions started rolling. "So, did she have more than ONE tummy to grow them in?" I told her no, that they all grew in the same tummy. They just were stacked on top of each other, like a pig pile in football. This led to  "Do you think they were squished?" I told her probably by the end and that is why they told their Mama they wanted to come out. "Did they fight?" I told her I bet it sure felt like it to my friend! "What about food? Did they have to all share the food in the belly?" I told her that they each got their own food from their Mama. "Well, did their Mama eat a LOT LOT LOT LOT of food?" I told her she probably had to eat a little more than she usually did. "I hope she ate lots of ice cream, cause you know how much babies loooooooove ice cream. Right, Mama?"


I knew where this line of questioning was headed. I saw it in Mags' eyes.  She wanted to take a detour in CanIHaveSomeIceCream Land. I quickly told her that my friend probably ate lots of healthy fruits and vegetables to help her babies grow strong.  She seemed satisfied by my answers. We finished up our drinks and I started to get up, thinking this entertaining conversation was over.


Then it happened. To be honest, I was a little surprised it didn't come out sooner. I heard her exclaim, "Wait, Mama! How did those babies get out of her tummy?"  Since Mags knows the doctors had to pull her out from a cut they made in my belly, I told her just that. The doctor had to make a cut in my friend's belly and pull the babies out.


She nodded at me, understanding. I could see her thinking, processing, and thinking some more. Then she asked,  "Hmmmm. Well, did they all hang onto each other when the doctor pulled?" I am certain I gave her my best confused look. Upon noticing my baffled expression, she kindly elaborated, "You know, like the doctor pulled one of the babies out and the other baby held her hand and then that baby held the other baby's hand. Did they come out like that?"

I started to laugh, not at her, but at the image
that immediately popped into my head.
You know you thought it too! 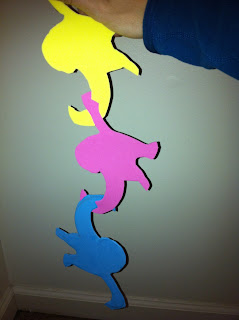 I told her the doctor pulled them out one by one for safety reasons.She said, "Phew! Well, I am glad they were safe." I agreed! This ended the conversation and the day went on in usual fashion. We played, picked up Tuck from the bus and Daddy came home.


I thought for sure she would play out the triplet thing with her own babies, but she seemed to have forgotten. I should have known better. While waiting for dinner and playing with her brother, I heard Mags inform him in detail about the Mama who had three "magical" babies all at the same time!  "Isn't that so special, Tucker?" she asked him after she had finished her story. Tuck's response to her was, "You are making that up. Nobody can have three babies at one time!". *sigh* I smiled and grabbed the card off the counter. I went over to Tuck, sat down, and explained it through once again.

This time though, I had a little help from Mags,
expert on triplets and "magical" babies.
Posted by According to Mags... at 11:49 AM