You know those horror movies where the girl is hiding from the stalker?  She is usually under a bed when all of the sudden, she sees feet. Just feet. Sometimes there are two sets. She watches them walk around the room as the stalkers look for her while she lays there waiting for her obvious fate. They are eventually going to find her. It's always the way in those movies.


This morning I found myself in a scene straight out of my very own horror movie. Let me start this by saying, the following events are based on a true story.


There I was innocently trying to stuff some chocolate in my mouth before either of the kids or husband saw me. They were in our bedroom, all the way down the end of the hall, so I knew I had a few moments.


Just as I thought this, I heard footsteps. One of them was on the move in my direction. I froze. I grabbed my phone and my chocolate. I had to escape, but where? I was in the kitchen! I remembered not to panic. That is how Drew Barrymoore met her demise in "Scream". Silly woman. You never run. You hide.


Then I saw it! Tuck's Lighting McQueen tent was set up right around the corner in the dining room. I hunched down and army crawled my way in. I sat way back and tried to get the flimsy "door" down in time. I fumbled with the tie. Only half way down. Better than nothing.


That is when the first set of feet appeared. DON'T BREATH! DON'T MAKE A SOUND! She called and called for me. She circled the area like Jaws. Since I was not in my regular hangout, known as the kitchen, she was at a loss. Completely baffled. 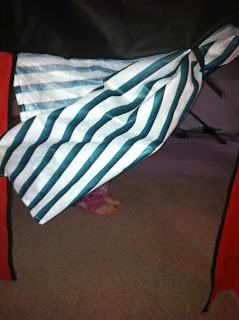 What's a good stalker to do? Go get reinforcements of course! Off she went and soon after was followed by her trusty side kick to help her look. She continually called for me while going back into the kitchen multiple times to make sure she hadn't missed me in there. The two of them had a quick brainstorming session of  "Where in the World is Mama?" right in front of the tent. I am so surprised they could not smell me. 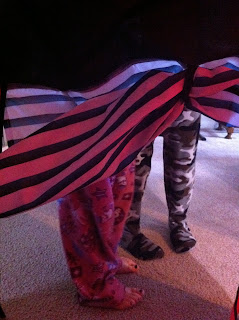 I was holding chocolate after all. That is all they wanted. That is what I knew they were after. They had heard me unwrap the first piece from 20 feet away. Their senses are heightened from my pregnancies of chocolate eating. When I unwrap chocolate that I do not intend to share, they just know. It's a gift. 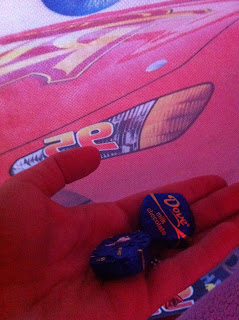 One more time, they both decided to check the kitchen. You can never be too thorough in your search...of the one room you looked in. (I need to hide in the bathroom next time. They'll never look for me in there.) 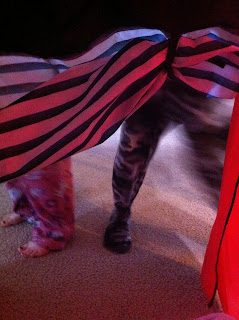 At this point I started to laugh so hard I could not contain it. They heard me. I was caught. Lucky for me, though, my stalkers are irresistible. They know I cannot resist their excitement when they find me! 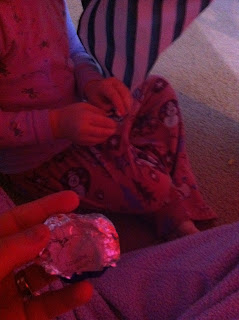