THAT IS NOT THE "ITSY BITSY SPIDER"

"Hey MAMAAAAAAA! There's a spider on the fireplace as big as my head."


My first reaction was to run as fast as I could down the stairs yelling,

We have found some big spiders in this house, including one of these suckers in our garage: 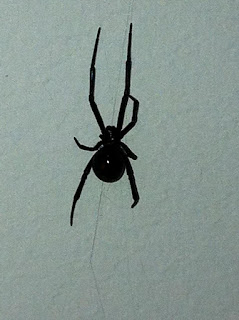 As soon as I reached the bottom of the stairs, I could see it on the fireplace. Tuck looked over at me and said, "See?", pointing at it. I put on my "no big deal" face while inside I was screaming, "NO FRIGGING WAY AM I TOUCHING THAT THING!". 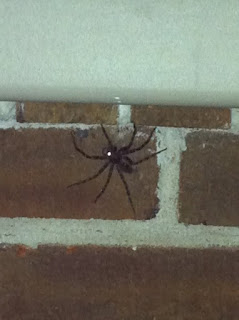 I had to, though. I couldn't just leave it there. Tuck immediately walked over with one of Mags' tiny little flip flops that would cover one of the spider's legs. Really, Tuck? Obviously we need to work on his spacial relations.


I led the kids back upstairs where I grabbed my phone (to text my husband a romantic picture), Raid for Ants (poison is poison in my book) and my husband's snow boot (the biggest shoe in the house). I slipped on some sneakers of my own just in case I missed and I had to do emergency stomping.


Armed with what I needed, we started down the stairs. I instructed the kids to remain on the top stair. You know how that goes. They ended up right behind me "instructing me". Mags was saying,

Her and her bugs! I appeased her by explaining I was just going to put him to sleep with the spray and then lay him outside. Tuck was quick to jump in,


I took a deep breath, cursing that my husband was out of town, and stepped forward. From that moment on it was chaos. I told the kids to step back, so of course, they stepped toward me. I sprayed the Raid, but only hit half of the enormous body. The spider wriggled and got PISSED. The front of it bucked up like a horse. I couldn't help it. I screamed. Tuck screamed in reaction to my scream and bolted to the stairs. Mags hit my butt saying,

Thank you, Captain Obvious...now get over to the stairs.


It scurried quickly down the brick. I jumped back, falling over Mags, who was of course not on the stairs. She was fine, but in the process, I dropped the boot and the Raid. Panic!  I kept my eyes on the spider, now limping a little, but still impressively agile. I sprang up, grabbed my weapons and sent Mags to the stairs for the hundredth time. I watched her walk over.


When I turned back around to face my enemy, IT WAS GONE! My stomach dropped. I looked frantically for what felt like an hour and finally found it where the carpet met the brick on the fireplace. Nicely played, spider.  I aimed and fired the spray again, this time draining the entire can. Do you know that spider kept moving? At this point both kids were chanting,

I did what I was told. I was victorious. I turned to my adoring fans, raised my hands in the air and did a victory dance like a wide receiver who just caught a touch down pass. The peanut gallery cheered wildly.


I thanked them for their encouragement and "help". We all recovered and got our shoes on to race to the bus stop. I felt a little less "creepy". I was happy it was gone and the spider ordeal was over. 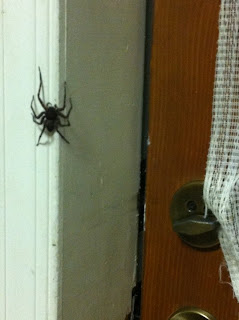 That is, until our next battle.