DON'T BITE THE HAND THAT CLEANS YOU

Mags: "See that big tool Tuck? That one, right there? They pull your teeth out with that."


Tuck's face turned white. Utter panic. What was Mags doing? She was laughing with a sinister tone. In reality, it was her first trip to the dentist ever and she was really nervous. It's not easy to tell when Mags is nervous, she hides it well.


Tuck is like me. If he is nervous, you can see it from a mile away. You can almost see his stomach churning. No worries if you can't visualize it because he will describe it to you in detail. It's his way...my way. We both talk incessantly through our nervousness driving everyone around us batty.


Mags, on the other hand, is like Chris. She is calm, cool and collected.  Like a poker player, I had to learn her signs, her "tells". It was much easier to deal with her once I knew what she was doing. She liked to focus on someone else, whether it was to support or tease them. It was her way to ignore the nervousness inside. I personally follow the motto "better out than in" (this motto works for a lot of situations), but whatever floats your boat.


So, there we were in the dentist's office. Tuck went first and was totally calm right after I explained they were NOT going to use that tool to extract any teeth. Mags sat and gawked, now holding Tuck's hand and watching every move the sweet dental hygienist made. Tuck just laid there, helping the hygienist hold "Mr. Slurpy" the water suction tool. Tuck, being brother of the year, was sure to position it just right so that Mags could see too. (He obviously had moved past the whole tooth pulling thing) When he was done, he hopped off the chair and told Mags, "Your turn!"


Mags just looked at me, frozen. Her eyes shifted from the seat, to the brightly smiling hygienist, to an encouraging Tuck, to me. I asked her quietly, "Would you like me to sit with you?" Mags straightened right up, got another reassuring look from Tuck and said, "Nope, I can do it." She wiggled her way in the chair with no help, asked for Tuck's hand and reminded the hygienist that she needed to get her a cool pair of sunglasses to block out the glaring light. That's my girl! She mimicked exactly what Tuck had done. She opened her mouth like a lion and helped with "Mr. Slurpy" . Tuck was sure to help her position it correctly so he could see, too. When she was finished, everyone was so excited. Cheers erupted for and from both of the kids. I was so proud of them.


Then...the actual dentist came in. You know, to count their teeth and poke that sharp thingy around their mouth while asking "Does that hurt?". Tuck jumped up in the seat like a pro, gave the gentle man a high five and opened his mouth ready to go. I had Mags' hand, but had not noticed the look of horror on her face. She was done with being brave. She had made it through her brother's cleaning, her own cleaning, sucking water up, spitting water out, new instrument sounds and she had hit her point.


The dentist reached back to the tray table meaning to get another pokey thing (I know they have names). Anyways, he was busy trying to keep Tuck's mouth open from where he had just sprayed air. By accident he grabbed the instrument that Mags' told Tuck they were going to use to pull out teeth. Of course.


Game over. Mags let out a gut wrenching scream, "NO! NO! NOT DAT ONE!". Everyone jumped, instruments dropped, and hearts thumped. I am sure people in the waiting room politely excused themselves and high tailed it out of there. The dentist picked up his pace after that. There was no getting Mags in that seat again, so he did a basic count of her teeth from across the room. He was so sweet, but I am sure he was thinking, "Yep. I see those teeth. They're all there for her age. Thanks for coming to visit, now get the heck out of my office so I can go change my pants!"


Overall, I would say we were successful. Teeth were cleaned, no one got physically hurt and Mags learned a lesson.


She learned sometimes your teasing can
turn around and BITE you in the end. 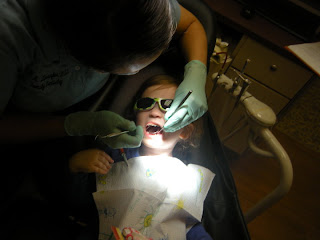 One more thing! It's National Childrens' Dental Health Month. The American Dental Association says so. On their website, they have some fun little teeth themed activity sheets for kids. They're towards the bottom. You know what they say. You can take the teacher out of the classroom, but you can't take the classroom out of the teacher. OK, I changed the saying a bit, but you get my drift. Click here for their website.
Posted by According to Mags... at 12:42 PM