DID YOU EVER KNOW THAT YOU'RE MY HERO?


Mags' brother (and father) have taught her every super hero, their real life name, if they are DC or Marvel, and  which villains match up with which super heroes. Mags' personality is a good mix of Wonder Woman and Snow White. It really depends on both of the kids' moods which game they play, but no matter what it is, somehow a super hero is involved.


I grew up with a big  brother, too. He was not big into super heroes. However, I knew all the rules of backyard baseball, every player's  name and number on the Celtics team, and how to position my hands on a basketball to ensure the best shot possible.


Let me brag about one of my childhood accomplishments for a second. True story. I won a town-wide basketball shooting contest when I was ten years old...against all boys. I hit every single shot I took in three minutes. Not just lay-ups either. I hit three pointers. When you stand outside for hours with your brother shooting basket after basket, you eventually get into a rhythm and learn what works.


Don't get me wrong. I loved every minute of it. Playing basketball, toy trucks (even though I always got the crappy toy truck), throwing the baseball back and forth or watching the Celts on TV with my brother were the highlights of my younger days. We were a good pair. I was a good mix, too, like Mags. At least I hope so. Like Mags, though, if given the choice between princesses or playing tag with my brother, he won, hands down.


I'm glad Mags has a big brother to teach her these things. Both of the kids learn what's important to each other and how to compromise during playtime. I can picture them going to Spider-Man 11 together, as friends, when they get older (I'm not making fun of it, Chris, relax!).  Never mind the fact that Mags will kick some butt in Trivial Pursuit: Superhero Edition. What? They don't have one of those? How odd.


So, here's to the big brothers out there who taught their baby sisters all the important stuff. Whether it was that you knew Larry Bird averaged 24.3 PPG (Points Per Game) in his career or that Spider-Man's black suit eventually turned into Venom, we made some memories together.

Plus, she looks dauntless in a super hero outfit! 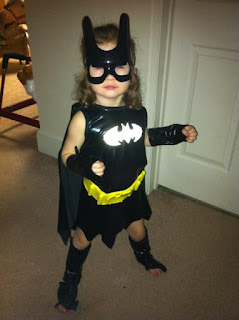