I'M LEAVING ON A JET PLANE

"MAMA! I got the window seat. This is the BEST day of my life"


I've flown with the kids a few times solo. The first time was a challenge for sure. My then ten-month-old Mags wanted no part of it. She was so unbearable on that plane ride that the kind man next to us bust out his bible and started praying. I'm pretty sure it was for me. I almost asked the stewardess to take Mags for a spin on the beverage cart. On the flips side, Tuck, my then sweet three-year-old, sat there with his frog headphones on soaking in Curious George. He was oblivious to anything going on around him. The flailing, screaming, hitting, kicking, biting, spitting baby next to him didn't phase him one bit. It's a man's  gift, like sleeping through the newborn's endless screams all.night.long. (ahem)


Guess what? I did it again last summer. It was a ton better. Both kids were exceptional. They were so excited to get on a plane and chose the very first row of seats. There were three across, so it was perfect. The cockpit was open at the time. The pilot noticed my munchkins gawking at him, so he got up and invited them in. I was sure Tuck was going to pee his pants when the pilot strapped him into his official seat. So many buttons, so little time! It was awesome. The kids were in awe.


As if that wasn't cool enough, the steward thought my kids were the cat's meow (smart guy). He let them pass out the snacks at 30,000 feet up and down the aisle of the plane. OK. So, he was probably a bit lazy and just didn't feel like passing the snacks out, but still, it was a memory my kids will never forget. When Tuck and Mags sat back down and buckled in, the steward handed them each a large, plastic bag containing about 25 small bags of pretzels as a reward for a job well done. CHA-CHING!


What did I get as a reward? The flight attendant dude saying to me, "Those are the most polite kids I've ever had on a flight in my eight years of doing this job." Double CHA-CHING!

Thanks, Southwest for the great crew, great flight, and
the enormous bags of pretzels. 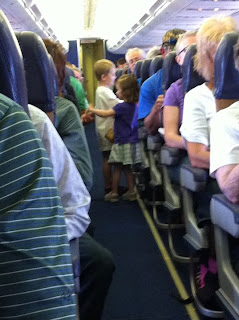