Trifecta: Finding What Has Been Lost

This post is in response to Trifecta's weekly challenge.

It’s Monday again and that means we’re on for another single word prompt, usual rules apply: 33 to 333 words using the THIRD definition of the word.


This week’s word is:

3 a: a relation of trust or intimacy <took his friend into hisconfidence>
b : reliance on another's discretion <their story was told in strictest confidence>
c : support especially in a legislative body <vote ofconfidence>

Authors note: We often see hikers this time of year on the Appalachian Trail (AT). Many of these hikers are called 'through hikers'. That means that they hike the complete trail, which is 2,180 miles from Georgia to Maine passing through 14 states. It's an impressive accomplishment. While driving past one of the entrances to the AT yesterday, I saw an older gentlemen with a pack on his back. It got me thinking of his story and why he would take on this journey. So, I made up my own story about him in my head. Enjoy. 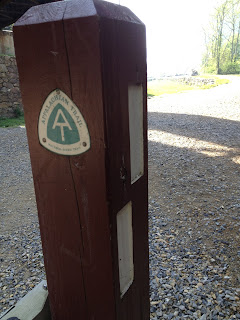 Finding What Has Been Lost
The fallen branches and twigs snapped under his worn hiking boots. The years glared through his deeply carved wrinkles and thinning, snow white, wisps of hair. A grizzly beard framed his jaw that had not expressed anything in years except regret.  His ragged clothes were exhausted and thread-bare. Each night they became less of a support and sense of warmth, threatening to let go of their hold on him. The pack, worn high and tight on his back, held shadows of his past. This was his way of “working through it”.

The only company he kept was the trail. It kept all his deepest, darkest secrets in the strictest confidence. He could always count on the birds to chirp a cover for him as he murmured his confessions to the earth below his feet. Every curve revealed a new discovery. He acquired glimpses of upcoming challenges in his guide book. He had learned that sometimes the book did not always fit him. Some of the more difficult areas of the trail were no match for his years of experience, whereas, what would seem more simple stretches, became an arduous task.

He had been walking from dawn to dusk for months now, determined to repair all that was damaged. He ended his day of hiking the same as always. He sat, released the confines of the pack from his back, and unzipped it. The fragrance from her silk scarf that was folded neatly at the bottom, though scarce, was still apparent. It always intoxicated his being. Forty-five years of her by his side was not long enough. He’d reach her on this trail. He’d connect with her tenderness. This was his pilgrimage. He knew, however, the trail held the biggest lesson yet to come. He had to learn to go on without her.