Tuck: "Can you believe I just did that all by myself? That was awesome!"

Our six-year-old learned to ride his two wheeler this weekend...again. We started working it at the end of last summer when he asked to take his training wheels off. He was able to do it. We practiced and practiced on his bike. Then fall and winter came and now here we are. Warmer weather and two inches taller.

Here's the thing, Tuck outgrew the bike he was riding. His first bike was lower to the ground and less intimidating when he fell off. His new bike is bigger, obviously, and offers more height. The saying 'it's just like riding a bike, you never forget' didn't apply here. He forgot.

If you think about it, there are lots of things you have to do simultaneously when riding a bike for it to work. You have to pedal to keep up speed, steer the handle bars to stay on course, and know how to properly use your brakes without flipping over the handle bars.

When we got to the trail, I took Mags on her tricycle to get reacquainted with pedaling. I noticed that Tuck was not the only one who had grown out of his bike over the winter. She was content though, pedaling, steering, and watching the boys. 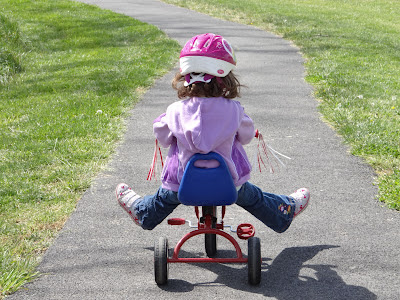 Tuck and Chris headed down the path with his new, bigger bike. They started with the basics. Tuck's cautionary personality set in pretty quick.

Chris explained that he could just ride into the grass on either side of the paved trail. That way he wouldn't hurt himself. Then off they went. Chris held the back of the seat for a big, then let go. Tuck would remember to pedal, but forget to steer. KABOOM! 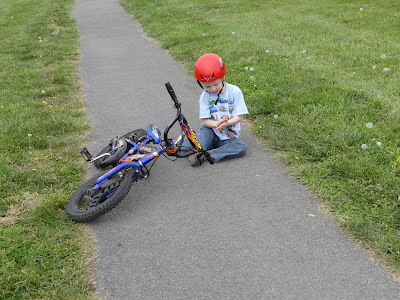 Chris would run over and give him some instruction and a reminder about steering. Tuck would nod, agree, pull his bike up, and they would start again. The next time, Tuck would steer really well, but forget to pedal, lose momentum, and tip over. Chris would swoop in, help him pick up his bike, and offer more suggestions and instruction. This went on for an hour. Tuck was exhausted by the end, but he had made significant progress. He had ridden by himself for lengths of the trail. He was really getting the hang of it.

We woke up the next day and decided to go try again. This time, we decided I  would take Tuck and Chris would hang with Mags on her trike. Tuck walked the bike to a little decline in the path and he climbed on. He remembered to bring the pedals forward, steady his handle bars, and push off with one foot. When I went to steady him from the back of the seat I was surprised to hear him say,

I took my cue to back off and told him I was going to run ahead so I could snap some pictures of him. He waited until I was positioned and watching him. Then, you know what? HE DID IT! ALL BY HIMSELF! He got on, pushed the pedals, steered...a little shaky at first...but then he was off like a shot! 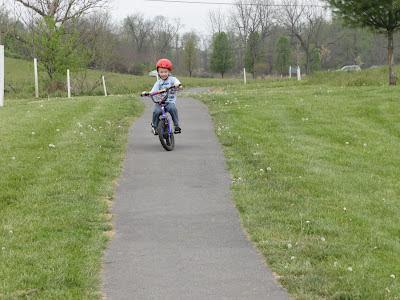 We watched him go back and forth on the trail. He had a few falls here and there, but overall rode around like he'd been doing it his whole life. 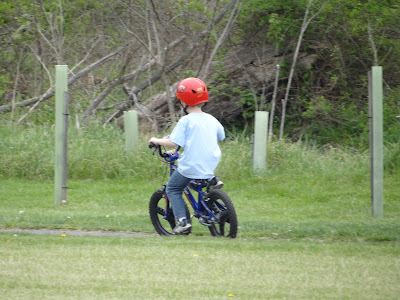 What Chris and I realized was that backing off gave him room to breathe and figure it out himself. Chris' instinct was to run over and talk his ear off about what he did right, what he forgot to do, and how to correct it for next time. In the end, Tuck knew what he needed. He needed us to SHUT UP! He needed to process all the steps on his own and figure it out. Sure enough, he did. The smile on his face and the pride that was beaming from his whole body was a moment I'll remember as a parent and will be a story I can tell all his future girlfriends. 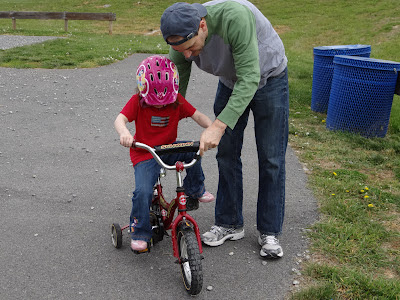 He wasn't the only one who had a big day with bikes, though. Mags, who was riding her tricycle, decided she was ready to move up to Tuck's old bike. Same process, different kid, different needs.

Luckily we now have an in-house expert to
remind us when it's time to let her go. 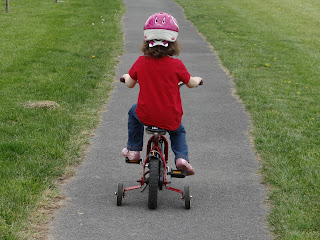 *Linked up with Memories Captured
Posted by According to Mags... at 12:02 PM