WAITING ON A TOOTH

Last night Tuck waited until Chris walked in the door and then yanked his very first loose tooth out. It had been loose since April, I kid you not. And the boy was done with it today when he could not eat the PB&J he had made all by himself. I distracted him from pulling it around noon by listening to our audio story, A Tooth's Story (you can listen here). Like I said, it's his first tooth and I knew Chris wanted to be there. Plus, it totally grossed me out and every time he pushed it forward with his tongue I felt a little lightheaded. Turns out I'm a huge woos with wiggly, wobbly teeth.

Since Tuck is our tenderhearted, gentle, old soul, we were shocked that he just dug right in and started to push it out. Chris handled the taping and Mags gave me the play by play (I couldn't watch).

"MAMA! THERE IS BLOOD! IT IS BLEEDING!" (I'm feeling faint)

Mags cheered her big brother on with her usual enthusiasm for all things Tuck. Chris recorded it for him to watch later. I could hear Chris gently coaxing him along and Tuck hanging onto every word he had to say. He worked at it for a little bit, but he was insistent that sucker was coming out and we were impressed with his determination. Then, POP! 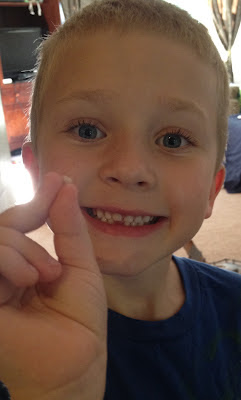 And instantaneously, he was "BIG". 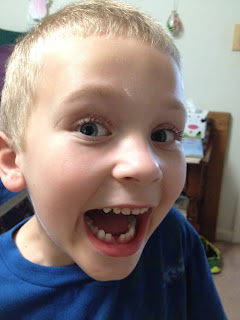 *If you haven't heard the song "BIG" by the kid's band, the
Imagination Movers, it's one you should check out.
You can find it on their Juice Box Heroes CD.