THIS TOO SHALL PASS

Mags: "Mama, you can be the boy Barbie."
Me: "I don't really feel like being the boy today."
Mags: "Yes you do, Mama. Don't be silly."
In reality, sometimes I just don't want to play Barbies at all, which always ends up making me feel incredibly guilty. I mean, this is what I signed up for. Days upon days of hanging around on the floor playing with our kids. I should want to do it. What is my problem? So I started to think about it and this is the analogy I came up with. Hang in there with me.
This is essentially my day job. I also have a few other part-time jobs, but staying home with the kids is my current full-time position. I can honestly say I love what I do. But no matter how much you love your job, there are always PARTS of it that are less appealing than others. When I'm tired from being up the night before with Mags, having a tea party is not on the top of my list unless there is a quick power nap between the first cup and the finger sandwiches.
The past week has been a challenging one with our spunky little four-year-old. She has found new boundaries to test and it's like we're a pair of dogs wearing the shock collars...except Chris and I have no idea where the invisible fence line is. We have escaped into the kitchen multiple times to shake our heads or just stare at each other in amazement at what was happening.
In other words, we weren't huge fans of age four last week. And that's okay. I realized it's impossible to appreciate every stage these kids are in. Standing in the Target lines with all those older women telling me, "Don't blink!", has increased my guilt meter (like it's not already overflowing with the Catholic in me).

Sometimes I want to blink. I want to scoot past that temper tantrums and the puke fests. Just like at my jobs out of the house, sometimes I wish the meeting would get canceled or the clock would move faster. There are no older ladies behind me then, smiling and telling me how fast it goes, don't miss it, and treasure every single moment.
It is an incredible gift...to be a parent. It's also a responsibility. A job. So, no. We don't always jump up and down screaming,
"Yes! He pooped on the floor AGAIN!"
However, we can be sure that just like the time at work, this stage will pass by soon enough.
Granted, sometimes at an agonizing pace,
but we'll get there...eventually. 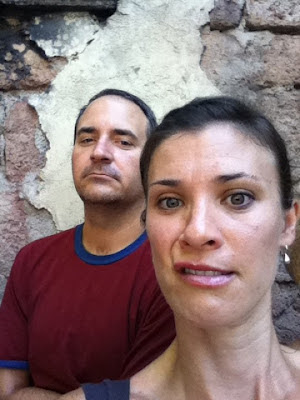