The Contraction That Started It All : Part 3

Mags: "What did the doctor say when she pulled me out of your belly again, Mama?"
Me: "She told the nurses to hurry up and grab this wiggly baby out of her wet hands before she wiggled right out of her hands."
Mag: "I was a crazy baby!"
Me: "In my belly. Yes. Yes you were!"

Mags gave us quite a ride. Chris nicknamed Mags "Trouble" from the second we found out I was pregnant. My pregnancy with her consisted of the following:

And those contractions made us all nervous. My doctor included. I was in there every week being monitored from 22 weeks on. And then, on the Thursday, one week before Thanksgiving it all started. If you haven't read The Contraction That Started It All : Part 1 and Part 2, I suggest you start there first.

So, after my adventure in the triage area, I went home. The contractions remained inconsistent, but intense. Every time I got up, I felt like there was a bowling ball between my legs. I knew the baby was coming soon, it was just a matter of when. Sunday morning at 3am, I was woken up by the pain. I counted two contractions in 15 minutes, but then was so exhausted, I fell back to sleep. I figured if it was the real thing, the labor would wake me up to my water breaking or a baby crowning. Neither happened. We all slept until 7am, which is unheard of in our house.

The day lingered on with contraction after contraction. We did some errands, called family to update them on my lack of progress, and then decided we should all take a nap. I got into the bed and laid down. I had three strong contractions in 15 minutes and decided maybe it was time to call the doctor. After telling her to hang on twice to breath through my my contractions, she told me to come in. Chris packed the car and then grabbed a sleeping Tuck. I was on the phone with my aunt and uncle who lived in D.C at the time. They planned to meet us at the hospital to pick up our little man and take him back to their house.

When we got to the hospital, my uncle was almost there. Chris dropped me off at the door and I kissed Tuck good-bye pointing out two bags to Chris that should go with my uncle for Tuck. I walked through the familiar doors and hallways to be greeted by a nurse. She wasted no time having me get the gown on, hooking me up and getting my blood pressure. A million questions later, Chris came into the room, big smile on his face, holding one of the two bags that was supposed to go with Tuck.

Me: "What are you doing with that, Honey?"
Chris: "You told me to bring this one in."
Me: "No, they were both supposed to go with Tuck. That's his diaper bag with his diapers, wipes, and milk cup. The other bag had his jammies and clothes in it."
Chris: "I'll go call your aunt."

When he came back in, he let me know that my aunt (a veteran mom of three) was already on her way to the store to get diapers. Awesome. Soon after my doctor came in to tell me that I was contracting every two minutes and that they were going to do a c-section within the hour. Then she remarked,

"Guess I was wrong. You aren't going to make it until Thanksgiving.
But you should definitely be home for it!"

She did one final exam, let me know the anesthesiologist would be in within minutes to prep me (I could have kissed her) and told me she'd meet me in there.

And then, things went fast. The nurses were getting everything set. Unlike Tuck's birth, everyone was relaxed. The anesthesiologist came in and said he was going walk me to the delivery room so that they wouldn't have to move me after he inserted the needle in my back. He didn't have to tell me twice. I was at the door to the operating room before him. He laughed at me saying that I was the fastest moving pregnant woman he'd ever seen.

I was numb in no time and every nurse there for the surgery walked over to me to introduce themselves. Chris walked in the room and looked a little panicked. I immediately asked what was wrong. He told me that he had lost his other sterile bootie to cover his shoe. He was worried his exposed shoe would contaminate the whole room. He was assured by everyone it was fine (as they all chuckled a little) and then it began.

There was a lot of laughing and joking throughout the surgery. Before we knew it our doctor announced that I'd feel a ton of pressure. Just as she was about to pull Mags out of my stomach, she asked the nurse for the time. The nurse commented if we waited just 30 more seconds, she could be born at exactly 5:00pm.  Before I could stop myself I shouted,

So, at 4:59pm (and 50 seconds), Mags was brought into the world, screaming and wriggling with all her 6lb 10oz might. The doctor welcomed Mags into the world, told us that she was a spitting image of her brother and ordered the nurse to quickly come take the wiggly baby.

And poof! Just like that, our family was complete. 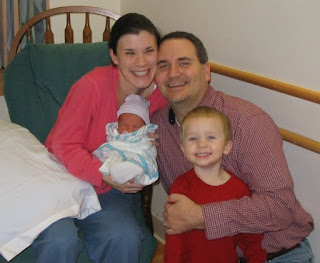