MY BABY IS NOT AN ALIEN


Me: "Mags, listen. I think I hear your babies crying! You better go check on them."
Mags: Mama, you know they're not real, right?"
Busted! Mags has never been one to buy into those types of things. She has always been too logical. When she was a baby and my son was a toddler, my husband would put on quick little shows with their stuffed toys. He made different voices for each animal and entertaining story lines. Tuck, who was two at the time, sat and laughed hysterically at my husbands' display. He would watch the toys as my husband pranced them across the floor hanging on every word they said. Mags, being an infant, would sit in her bouncer and watch her father, not the toys. She threw my husband a bone once in a while and flashed him a smile, but she never bought into the toys being the ones who were talking. Fantasy has just never been her thing.
Mags does use her imagination plenty, but the story lines between her dolls always revolved around real life. I found when I spied listened in, it was usually about something that she herself had experienced. So, a lot of times, the dolls were chatting it up with their mom, singing silly songs or in time out.


Tuck on the other hand, was all fantasy. He turned any daily household object into something from his imagination. For example, a spaghetti strainer became a helmet, a spatula became a sword, his little folding chair became a hang glider, and my husband's boots became moon boots.


Together, these two made quite a pair when they were playing. Over the years we have worked with them on learning to compromise. Tuck had to learn that if he played dolls with her, it was going to be real life. There would be no flying babies or babies that turned into aliens and lived on Mars. It would be straight forward. Tuck was the Daddy, Mags was the bossy Mommy and the babies were being fed, diapered, and having their clothes changed.


On the flip side, Mags knew that when she was playing with Tuck, she had to throw him a bone, too. She had to "camp out" in the woods with bears and go on a search to find the "bad guys" so they can save the world. She'd humor him, but then after a while, she'd start switching it back to real life.


Due to her constant attempts to make his game her own, Tuck had to get creative. He had to figure out how to keep her in his game. He tried a bunch of different tactics like screaming, begging, and telling her he was never going to play with her again. Those strategies didn't phase her.


Then, after he received some insider tips from my husband and I, Tuck realized that there was one thing Mags could not resist. Dressing up. Since both of them had super hero costumes from Halloween, he put his on one random day. Of course, seeing that Tuck was wearing his costume, she HAD to wear hers! From that point on they figured out how to make their games work for both of them. 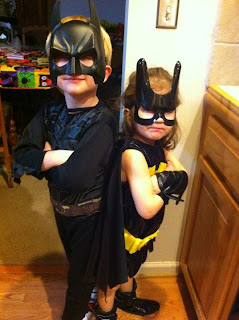 With realistic plots, of course.
Posted by According to Mags... at 2:20 PM