IT'S ALL ABOUT SPATIAL RELATIONS

Mags: "Mama, can you help me get her boots and superhero outfit back on?"
Me: "Mags, you have had this doll for just a few minutes, why is she already naked?"
Mags: "Maaaaaama, you know it's what I do."

True. There are not many dolls in this house that are decent. Especially the Barbies. They all seem to be "clothing challenged". Chris calls it "Barbie Spring Break". So, when Mags discovered the Polly Pocket type dolls, I thought these would be different. Why? I don't know. I thought the rubber dresses would be hard to get off. WRONG! They are insanely easy to get off. On the flip side, they are insanely difficult to get back on. Rubber against plastic doesn't exactly glide. Mags would end up getting frustrated and come out of her room screaming like a lunatic, "WILL SOMEONE PLEASE HELP ME?!" Seriously, these things could drive a person nuttier than a squirrel turd. (I saw that on a bumper sticker this week and I have been DYING to use it.) At least the ones she had didn't have shoes. Until....

...bum, bum, bum. Wonder Woman came along. She was perfectly placed in the Target check-out aisle, at Mags' eye level. Score one for the person who stocked the aisle. Your manager would be proud. I knew it was done for suckers like me. The 30-something mom who watched Linda Carter as a kid, who raced around the house in her Wonder Woman suit while throwing her Lasso of Truth around anything that didn't move. Of course I had to buy it for Mags. "Oh, look, she has cute little boots." I thought.  I wasn't thinking straight. I was stuck in my nostalgic moment feeling all warm and fuzzy.


Two minutes after getting home, I was snapped out of it. Mag had successfully removed the one piece outfit and the boots. When she brought them to me, I got the outfit on relatively quickly. The boots...well...those were for a professional to do. It took me 20 minutes to get them on. Before you laugh at me, they have really tiny openings. Take a look at the picture. Her feet are ENORMOUS for such a tiny opening. When I finally got the foot in, sweat dripping from my forehead, I didn't want to force the foot down for fear I would rip the boot. That would bring us into meltdown city. I had to choose the hill I was going to die on. Mags at this point had deserted me (traitor) and gone to play with her unkempt Barbies.


Finally, after I turned, maneuvered, twisted and even considered Vaseline, one slid on. I quickly imitated the motions on the second one before I forgot and it slid on effortlessly. As a mom, though, I knew after five minutes, I would forget how I ever did that. I considered getting the superglue out. I did, I'm not ashamed to admit it. I didn't want these boots to come off again.


Mags was excited and when she saw my face, I think she could relate to my frustration. She told me, "Let's just keep her dressed." It was the best idea I had heard all day. So, off we went, playing happily. I knew Mags was not going to be content with a fully dressed and booted Wonder Woman though. I knew she would figure something out.

If you thought her boots were hard to get back on... 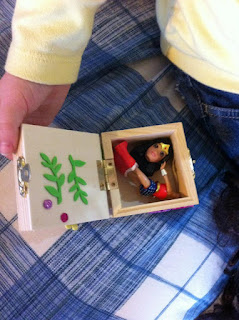