THE LAUNDRY ATE MY BABY

Mags from her bed: "What are you doing out there? Having fun without me?"


I wanted to yell back, "Yes,  I'm having a laundry party. It's LOADS of fun", but she wouldn't get my funny word play and would just hear "party". Drama would ensue and I would regret trying to be clever with my words. Instead I stuck with my old standby: "I'm just folding laundry. There's no fUn without U, Mags." She doesn't get it yet, but it satisfied her need to know that I was not having fun and my need to have a clever moment.


I remembered Tuck doing this, too. When I would pick him up from preschool with itty bitty, newborn Mags, he immediately would ask me, "What you and baby do while I at school?" (He was only two at the time) I would always respond the same way, "Well, I dusted and washed dishes." I had learned my lesson the week before that when I mentioned I had fed her and he flipped out in the usual two year old manner. "NOOOOOO! I feed MY baby! WAAAAAAAAAAAAAAAAAH! No Mama! No Mama!" Cue Mags to be startled awake from her brother's screams,"WAAAAAAAAAAAAAAAAAAAAAAAAAAAAH!"
Awesome. Maddened Mel, tantrumming Tuck, and a miffed Mags. It was the perfect combination for a super fun car ride home. I digress.


Where was I? Oh, right, laundry. Aren't you so glad you are reading this today? So, the laundry party I was having. That excuse worked for a bit. Then she got smart. She decided she wanted to "help". Anything to get out of quiet time worked for her. I fell for this one day when she proposed from her bedroom door, "Mama, can I help you fold the clothes?" Since I was staring down six loads of clean clothes that had been piled on top of each other throughout the days, I was weak and jumped on her offer to help. "That would be great, Mags, if you want to help me fold during your quiet time."  BIG MISTAKE.


She flew down the hall with two naked Barbies in hand. "I'm here Mama!" Then the bossing began. First, she wanted different music than what was playing on my iPod. "How about we turn on some Laurie?" That would be great, but I wasn't in the mood for kid's music. I really wanted to listen to MY music. MY "big girl" music. Since it was supposed to be MY quiet time, too. This was already a bad idea. Next, she told me "My Barbies are going to help us." This meant she was going to play dolls while watching me fold clothes and incessantly talk my ear off...over the kid's music she insisted turning on.


I suggested that she could be "The Sock Hunter". I told her it was a very important job where she had to track down all the socks in the pile. The indecent, blonde bombshells could use a sock or two to cover up. It's like a nudist colony for Barbies in this house. Anyways, this caught her attention. She liked that. So, we spread out the laundry that enveloped my bed and most of my bedroom floor. I was busy attacking the bed pile while she was busy hunting through the pile below. I looked behind me to see that there was a nice little sock pile forming. I was pleased she was actually doing it. She was busy as a bee. I praised her efforts to ensure she would keep at it.  As I folded, she predictably chattered her way through the hunt. Then, as the third "Rocketship Run" song ended, I heard silence.  I turned around and didn't see Mags. I must have got lost in the kid's music and not heard her leave the room. I called for her. Then, I heard a giggle...and the laundry pile came to life a bit with some movement.

Oh no! The laundry ate my baby! 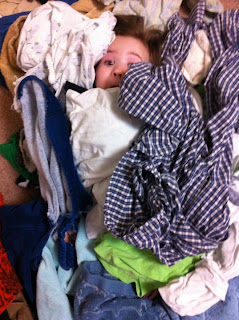 I guess the hunter became the hunted
Posted by According to Mags... at 11:55 AM