We got ourselves off the mountain and went into the big city this weekend! Some planes, trains and an automobile later, we were in Washington D.C! We actually just SAW the planes as we were driving past the exit for the Dulles International Airport, but in the kids' minds, they were on them. Mags went to California for a quick trip and Tuck went to the moon. His "plane" was obviously a little more advanced.


When they returned from their imaginations, we were at the Metro station. This is usually the highlight of our whole adventure into D.C. We literally could just purchase the "One Day Pass" and ride back and forth on the Metro all day and the kids would be just as happy. This trip was different, though. We were meeting up with some family members that we adore, so we were all anxious to get on the Metro and see our cousins' smiling faces.


Ahhh. The Metro. My hand sanitizing, Clorox wiping, no touching anything-self's worst nightmare. Seriously. We step onto the Metro car and I feel the germs CLING to me. By the time the kids have scooted their little butts into a free seat, they've already touched two handrails and bumped into six people. They are covered. It's the name of the game.


We sit and soak in the Metro...by people watching. Lots of different people to check out. There are the super trendy people who avoid eye contact with everyone. They usually sit there repeatedly refreshing their iPhone waiting for a signal that will never come in the tunnel we are speeding through. There's the tourist who is panicked and referring to their pocket guide, usually with a spouse and two fighting kids in tow. They look worn out and either under-dressed or over-dressed for the weather. There are the sports fans. If there is a game that weekend, the train will be packed with team t-shirts and hats. The groups will be loudly recapping the game while swinging from the handrail above them only stopping their chatter to check to make sure they didn't miss their stop.


Then there are the stroller pushers. These are the parents with two young children and a double stroller. One parent usually has a baby on their hip and one is crudely maneuvering the double stroller into a small open space in the Metro car. It's like Tetris. You can almost hear the music if you listen closely enough. There are bags, coats, water bottles and a toddler piled high in that stroller. Once they are situated, the toddler ALWAYS starts the fight to get out and hold the dirty hand rail.  Chris and I were in that place last year so we can relate. It sucks. I give these people my best "I know what you are going through" look while they give me their most intense "You wouldn't happen to have some Rum, would you?" look.


There are trade-offs. I only carry a purse now. You know, my purse that fits my whole house in it. No change of clothes, no diapers, no bottles and no STROLLER! However, you end the day with two tired children who just want to be carried the "rest of the way" to the Metro. Then when you get on the Metro, said children have used up their listening for the day. They don't care that there are 41 seats empty for them to sit in. They want to stand up and hold that shiny silver pole covered in disgustingness. (I just made that word up) Since Chris and I are tired and have also been giving reminders all day, we don't care. Go ahead, Tuck, hold onto that pole. Then I see it. The other kind of person on the Metro. I am jolted out of my exhaustion to realize why I don't want Tuck or Mags holding onto the pole.

The "Butt Grabber".
It's always at the exact level where my kids' hands would go. 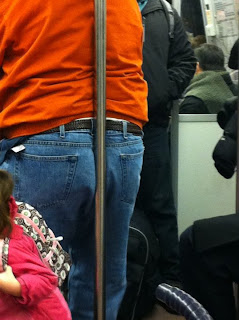 Don't mind me.
I'm just FRANTICALLY digging for my anti-bacterial wipe.
Posted by According to Mags... at 12:29 PM