Mags: "Mama! I just sent Meme and email on your phone. Isn't that awesome?"

Yes. Awesome. We were in the car and I knew giving her my phone was a bad idea. She was learning how to maneuver around the iPhone and she wasn't afraid to do it. She rearranged all the icons into folders on my screen. They were well done, by the way. She also learned that if I received a text, all she had to do was press the circle button at the bottom and it would "go away". That and pressing the red button also worked at getting rid of those pesky incoming phone calls that disturbed her game playing. I could almost hear her little mind, "Not right now, Auntie Kerry, I am about to level on the shape game."
I started to catch on to her tricks when I began getting texts that said, "Did you get my last two texts?!?" or phone messages that would say, "Hellllloooooooo, I've called you three times now. Call me back." Sure enough I would go into those screens to check and find all sorts of lost treasures that she had "closed out". So, we had a talk. I told her if anyone sent messages or called me to hand me the phone right away or she wouldn't be able to play her beloved shape game on the car ride to school. That's right. I'm the mean mom who would take away her shape game.
She understood and knew I meant business. In all seriousness, sometimes the student teachers I observed would call to cancel or my mom would text me. All very important. Then, she got clever. She decided to "help me out" and answer my texts for me, like my secretary or my phone handler. Oh so helpful. How she figured this out, I will never know. She was busy.  People were getting random texts from Mags left and right one morning. Some got pictures, some got jibberish, some got actual phone calls. All within the 13 minute drive to preschool. Lovely. Sorry friends and Mom.
Another talk occurred. I could not argue with her logic of "helpin' me out". I realized I needed to come down a level and rationalize it in Mags' speak. I explained how rude it was to do that and how it was not her phone. I let borrow it to play her favorite game on the way to school and I threw in the old "I trusted you" for good measure. I told her it would be like me going in to her room and dressing all her Barbies. She gasped. Heaven forbid any doll be dressed in this house. She said she understood...again. We walked through the buttons together and I showed her the ones that were "hers"...again.
Then, I showed her the "camera" button. This turned out to be my solution. Mags has a love for pictures. She started spending the entire ride to school looking through the hundreds of pics I had taken on my phone and not downloaded on the computer yet. It brought out some great conversation and laughs between us. It quickly became both of our favorite button.
Of course, it wasn't long before she figured out
that she could also use it to TAKE pictures. 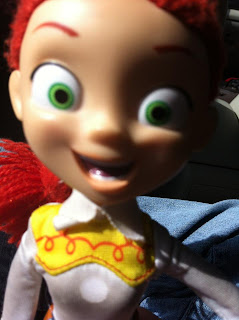 You know, like this little gem.
YEEEEEEEEEHAAAAAAAAW!
Posted by According to Mags... at 12:13 PM