Chris had a conference in Disney World a few years back. Since we were all on Spring Break, we decided that the kids (then ages 4 and 2) and I would go along for the ride. As an added bonus, we planned to meet my parents there so we could go to the parks together while Chris was attending sessions at the conference during the day. March in Florida was going to be splendid. SPLENDID, I say!


Then three nights before we were leaving, I heard it. I thought maybe Tuck had swallowed wrong in his sleep. No biggie. He'd cough it up, roll over, and everything would be fine, or so I thought. Then he did it again. This time the cough was more forceful, more bark-like in sound. CRAP. CROUP. CRAPPY CROUP!

The next night Mags was hacking up a lung in unison with Tuck. They were creating horrific harmonies not safe for the human ear to hear. We turned on humidifiers, steamed up the bathrooms, and elevated their heads. Nights were rough, but days were fine. They had no fever and the croup was evil. It only came out in it's most torturous form at night. So the kids were maniacs during the day, while Chris and I were in a zombie-like state. The more they'd run, the more they'd cough. After a few nights of the crappy croup, it seemed to be settling down. Perfect timing!

The morning we were leaving for Disney World, I was excited because we all seemed to get a decent night's sleep. As we were driving to the airport, I commented to Chris how much better the kids were sounding (I should have knocked on wood). I also remember saying that I didn't think we needed the diaper bag. Mags had been potty trained for well over six months and Tuck hadn't had an accident in years. I had just given them Tylenol before we left, so they wouldn't need it until we landed in Orlando. Chris and I decided for the first time in four years to pack the diaper bag, that held the kids' spare clothes in it, in our check-in bag. We wanted to make it easier on ourselves. I still don't know what we were thinking.


We got through security and realized that we still had to get on the tram to bring us over to the actual gate. While standing and waiting for the tram doors to open, both kids began coughing. All the moving around, even at a slow pace, had sent their lungs into a tailspin. It settled down a bit once we sat for a few minutes. Then we arrived at concourse B and started walking. We were the last gate at the end of a very long walkway.

The coughs continued on, so we decided each of us would carry a kid. Once we got to gate B24, we sat the kids down in chairs. Mags was having a coughing fit at this point, so I was getting water out of my purse when she let rip. Chris, with his ninja like reflexes, caught the entire amount of puke she expelled in his right hand. We stared at each other in disbelief.

"Don't just stand there, go get some paper towels."

We started laughing as I raced around the corner and ripped out as many towels as I could in a ten second period. I didn't want him sitting there with puke in his hand any longer than he had to. When I came flying back around the corner ready to rescue him, he yelled to me,

"We're going to need a lot more than that!"

He nodded to Tuck and his LEFT hand that was now full of puke as well. He really should have been awarded 'Dad of the Year' right then and there. I cleaned up his one hand at least and ran back to get more towels. I returned more paper towel than women and surveyed the damage. Both kids and seats were covered. Remember the wicked smaht decision we made to pack the diaper bag? Oh yeah! I was regretting that now. BIG TIME.

Not as much as Chris was, though. 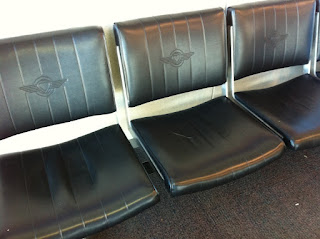 This post is dedicated to my husband. While he was waiting to get
on a flight, he sent me this picture in a text that said,
"I have your next blog post. I call it...Puke Palms."
What a gross memory. What a sweet gesture.

Since today is our 8th wedding anniversary, I'd just like to say:


Chris, I love that you proposed to me so creatively and I am so happy I said yes when you asked. I am also so happy you were the
one sitting in front of the kids when they both puked.
I would have only added to the mess.
You're my hero!