Tuck: "Mama, you're not going to cry today, are you? That would be really embarrassing."

I promised Tuck I would TRY not to cry. That's a hard promise to make. Especially because it was his Pre-K graduation. This was a big step for all of us. It meant he would officially be in elementary school in the fall, ride the big, yellow bus he had drooled over for years, and be without ME the whole, entire day. He would be a "big kid" and he reminded me every chance he got.
When graduation day came, he was nervous. Like, puke in his graduation cap kind of nervous. I asked him what the deal was as we sat at the breakfast table and ate our Blueberry Frosted Mini Wheats. The little, cardboard graduation cap he had to wear became the topic of conversation and was the cause behind his quivering lip. He didn't like the hat. It had an elastic on it that dug into the back of his ears and under his chin. To be fair, this kid has a HUGE noggin. I have the battle scars to prove it. So, I told him when I dropped him off that I would help him loosen the elastic. That appeased him and just like that Transformers became the new topic.
We arrived at the school. In the twelve minute drive there he reminded me sixteen times about the evil elastic. We hopped out of the car and walked into MASS CHAOS. Kids were crying, teachers were consoling, and parents were running away. Before I knew it, Tuck was sucked in the classroom by an invisible force. I explained the hat situation to his teacher, Ms. Nancy, who graciously hid her, 'you are a whack job' look and told me she would take care of it. Ms. Nancy, being the best teacher in all the Pre-K land, was always true to her word. I ran away with the rest of the parents to get some quick errands done before the ceremony.
After I swung by the bank and the grocery store, I went home to pick up Mags and Chris. Off we went to see our boy achieve yet another milestone in his life. The three of us entered the school and Ms. Nancy gave me a thumbs up. Awesome. Problem solved. Then we found some chairs and waited for the procession. As the kids walked in, I spotted Tuck immediately. He was fumbling with his hat and fighting back tears. The second he looked up and saw me he was out of line, into my arms, and sobbing.
"The hat is too big! Now it's falling off."
I quickly attempted to readjust to no avail. In fact, I broke the elastic. A look of horror filled his tiny face.
"It's okay. It will stay on, no worries." I lied.
At that point he told me he was NOT going to wear it and left to take his place up in front of the parents, sans cap. He cried through the first song and then, just like that, he pulled it together. He was doing it. He was being a big kid dealing with a little bit of disappointment and moving past it. Yes, it was just a cap, but this was a big moment for him. He NEVER, EVER lets anything go. He chews on it like cud for hours, then swallows it, then brings it back up to chew on it some more. I swear that boy has seven stomachs.
We were proud to see him get it together without our coaxing. It was a telling moment. He was growing up. He was learning. He was becoming a big boy.
I mean, honestly. Who needs a graduation cap anyway? 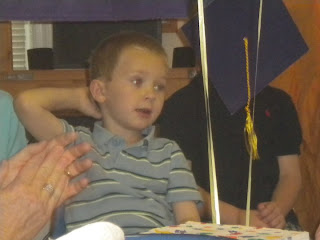 This post is linked up with "Dare to Share: Graduation" at The Lightning and the Lighting Bug
Posted by According to Mags... at 11:21 AM