The other day Tuck was reminding me over and over again that he was now officially going to be a second grader. I taught second grade once upon a time. They are real live people...with ideas...and able to do things on their own. A lot of things! They are <gulp> big kids. In between wiping my tears I was trying to figure out how the time had gone so fast. I began to think about the summer he was born. I decided it would be fun to write it out on the blog (I intend to do this for Mags' birth as well sometime in the future). As I began writing, I realized I was going to have to split it up into two parts. So, if you missed it, PART 1 of the story is here. Now, on with the show.

TUCK'S BIRTH STORY: PART 2
The doctor gave up and decided it was time to induce me. The medication they inserted to start the process worked well. My body took over and I was in active labor fast. Chris walked around the nurse's station circle with me about 100x making me laugh the whole way through some intense contractions and chest pain. I was "progressing nicely".

Day ONE the nurse told me I would have the baby by that night. WRONG. We both fell asleep for the evening as my sneaky labor stalled. I woke up the next morning to a new nurse giving me some more medicine to "help the process along". Day TWO of active labor was just as eventful, but now I knew exactly what to expect. What's that saying? Ignorance is bliss. Yep. That's it.  Chris walked with me another 100X around the circle, rubbed my back, and we watched some Shark Week on TV (Shark Week in our house will always=birth of Tuck). Our doctor appeared mid-day to check my progress and I heard him say,

"Finally. I can break your water and that will really get things moving along."

Next thing I knew he was counting back from three and I felt like a water cooler. An actual "blub blub" sound came from my stomach and a huge GUSH! Then, PAIN. It was like someone shot electricity across my stomach. Our doctor, who now looked more like an orchestra conductor holding the water breaking baton thingy, told me that I could have an epidural. An overwhelming desire to kiss him came over me until he followed up that statement with,

"But you'll have to wait because the anesthesiologist just went into surgery."

I wanted to belt him. Was he kidding? Jerk! That's like offering a kid a huge ice cream with jimmies and pulling it away at the last minute saying,

Hours of labor went by and we were at dinner time. I'd beg Chris to go look for any sign of the guy with the big needle that would give me relief. I didn't care where he was going to put it. It had to be less painful than what I was feeling. Our nurse called it "dry back" labor. It should have been called, "the scene from Alien" labor. You know the one I'm talking about? I can sum it up quick. Stomach ripping open, alien popping out.

Finally, a man came in with scrubs on. That was a good sign. He introduced himself, but all I heard was "WAWAWAWA epidural WAWAWAWA". I swear a white light surrounded him. Sweet relief was on its way. Once the needle and meds were in, we were told to sleep for a while. The nurse was sure it would be soon. Hours later we woke up and I felt a lot of pressure. The nurse was already on her way in the room after she had noticed a change in my contractions. She checked me and Chris and I both heard the long awaited words,

Tuck would be born. We couldn't wait. Little did we know we had one more surprise in store. After three hours of pushing (puking the whole way through), heading into three days of labor, and my epidural breaking, I was toast.  At about 2AM my doctor walked in with sheet marks on his face (hope you had a nice sleep, Dumb Dumb Water Breaking Man). That was all I could muster at that point. Our doctor looked at us and said,

"The baby's going to have to come out the other way."

I remember being so delirious at this point. Crying and scared I looked up at Chris and asked him in a panic,

"What is that man talking about? What other way?!?"

Chris immediately calmed me down and whispered the words c-section. After that it was fast. Apparently Tuck's heart rate plummeted into trouble and it became "emergent". I was strapped down and drugged up. Plastic blue sheets were hung, spread out, and metal instruments were clanking around on trays. The doctor was mumbling things to the nurses about starting now and how they didn't have time to waste. I started to panic at this point and I can remember begging the nurse to please just get me my husband. Chris came in and was instructed to sit and NOT MOVE. Just stay seated. At this point the doctor pinched me to test my numbness.

The anesthesiologist looked down at me in disbelief. The doctor ordered him to "fix the situation". More drugs were pumped into my IV and the table was slanted on it's side...with me on it. WEEEEEE (I was drugged up, remember?) Then I was numb and no time was wasted. A few minutes later we were in the heat of it. The waiting was overwhelming. Then there was pushing, pulling, more pushing. Holy guacamole, I swore the nurse was sitting on my chest. The doctor announced to us,

"Now, it's not like the movies. The babies don't always cry the minute they are pulled out. So, don't be worried if he doesn't cry right away, OK?"

Great. That's fine. I wanted to yell at him to just pull the baby out already and tell the nurse to get her butt off my chest. And then, the sweetest sound Chris and I had ever heard. CRYING. A precious newborn baby cry. Immediately. The doctor was shocked but I wasn't surprised. Tuck had been in charge the whole way through this event, why stop now? They whisked him away and announced numbers at us. Apgar 9, weight 7lbs 11oz, length 23.5 inches, head circumference 14 inches.

In one word: PERFECTION.

To this day, if you ask either of us about that summer, we'll both say it was hands down the best summer of our lives. Yes, we had moments of uncertainty and our fair share of scares, but in between we laughed, read books, I lost at Monopoly and Chris and I connected on a whole new level...as soon-to-be parents.


Plus, we got the sweetest little prize at the end for all of our waiting. 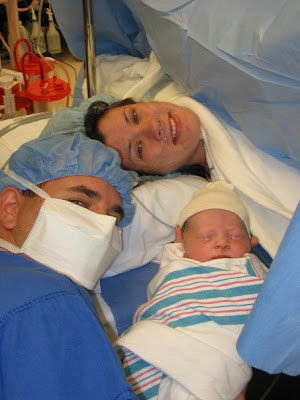 (Insert colic for the next four months here)
Posted by According to Mags... at 6:55 PM