Today was the day it happened. I knew it was bound to show up.
The storm. 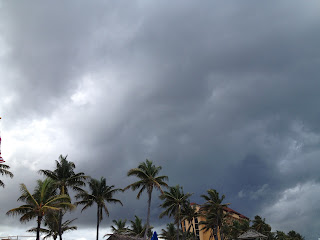 For weeks I've kept my head down. "Eyes on the prize" so to speak. Chris and the kids kept me laughing and well distracted in anticipation for the surgery. I had projects I was working on and fun plans I was making for summer trips. I had lots and lots of support from family and friends. When the day of the surgery came I was ready. I was scared out of my mind, but ready.

It happened. It was over. I was home and recovering. I was thankful. Things went well. My husband and kids were the best caregivers ever. I got a gold star for my post-op check-up. I was fine. Mostly. Mostly is better than most, right?

Then it was finally here! What Chris and I have been waiting for. Our "big kid" trip away. We've been having a fantastic time talking, laughing, and being goofballs. But today it hit. Everything hit. I don't know what it was. I was restless. Chris even pointed it out.

We were on the beach for heaven's sake without any worries or cares. Of course I was okay, but I didn't FEEL it. I felt edgy. I tried to lay down, go to the water, read a book, snack on some watermelon, drink something delicious, but the nagging feeling was overwhelming. Then the storm clouds rolled in behind us. When the clouds let go, so did I. We rushed to gather the towels, coolers, chairs and hurried off the sand as the rain poured down on us (again). That's when I noticed it. I was crying. And it felt good. As we walked back to the condo, Chris and I were able to talk through my tears. He made me laugh...to which I ended up doing a "laughcry". I love that man.

I've made such a huge leap in my healing by being here the past four days. I've been feeling much stronger physically and mentally (phew, I was worried about this one especially!). I think I needed to let go emotionally. After a solid cry in the rain, the skies look a lot brighter. I knew it was coming. The storm.

But I also know what's behind it. 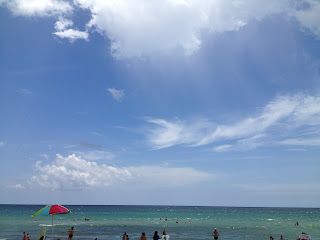