And for the rest of my life I will never live down those words. Ever. He'll be calling me for movie reviews from college and then reminding me:

"Are you sure? Remember when you said there weren't any scary parts in that one movie, Mama?"

Yes, I remember. But, to be fair, Tuck is an easy scare. He's jumpy like his Mama. If a scene in the movie we are watching is set at night, he is on high alert. He'll start by sitting straight up. Then he squirms in his chair. He'll ask for a snack or even get up and pace. It's always been his way.

About a month ago we were invited to a cool "sneak peak" of the 'Diary of a Wimpy Kid'. Chris works with the author, Jeff Kinney's sister. She wrote us and asked us if we'd be interested in bringing the kids to have some movie fun. As an added bonus, Jeff was going to be there, so we would be able to meet him. We were all in for the adventure.

We arrived, met up with everyone, got ourselves some treats, and made it into the movie theater. Tuck was excited that he got to meet a "real live" author. It was very cute and Jeff was very sweet with all the excited kids that were there. After we were situated in our row, the movie began with Jeff introducing it. There was laughter, popcorn eating, more laughter and happiness all around. And then...there was a scene set around a campfire at night where the kids were telling ghost stories. Mags put it best in her description when she said,

"It wasn't 'scawy', it was just a little spoooooky."

Scary or spooky didn't matter. I felt Tuck start moving around right away, so I put my hand on his. I knew the scene was coming to a close soon, so I began to relax...and so did he. Then, it happened. A typical "lure you into a false sense of comfort" type of scene. The ghost story being told on screen was coming to an end just when one of the actors jumped out yelling, "MUDDY HAND" really loud causing everyone to jump in their seats a little.

Not Tuck. He screamed. A guttural, high pitched, lengthy shriek . It was the scream heard 'round the world...or the movie theater in this case. He was wrapped around Chris in a second crying at the top of his lungs and begging to leave. Chris held him tight and hugged him whispering that it was over and trying desperately to sooth him. That's when we were pretty sure we knew why everyone jumped in the theater.

After the longest three minutes of Chris' life, we finally got Tuck settled. The rest of the movie went swimmingly. We enjoyed being together and while Tuck didn't release his grip on Chris, he did laugh out loud a few more times.

So, kudos to you, Jeff Kinney! We had a BLAST at your movie. And thank you for the invitation, Annmarie. It was much needed family time and Chris got a nice long snuggle from his fast growing boy. Sorry we scared the poop out of the audience. We'll just say we were "placed" there to add to the effect.


Oh! And from now on, we'll just stick to these
kind of "muddy hands". 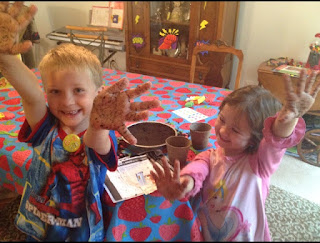