Me: "I'm sad the Pats lost."
Chris: "You're talking to a Bill's fan. Try feeling like that every week of the season."

That’s okay. I’m sure you’ve all heard about this upcoming Sunday?  Of course you have! That’s right! Super Bowl XLVII is coming to the Mercedes-Benz Superdome in New Orleans this Sunday, February 3rd.

Throw me something, Mista. What did you say? Yes. You in the back wearing a bunch of beads and a football jersey. We don’t shout that at the football players? Oh man!

Well, what the heck? They have to know they are in NEW ORLEANS DURING MARDI GRAS season. I mean, really, our families have watched these men (ALL.DAY.AND.NIGHT) for many, many Sundays now. The least they could do is throw their fans some beads. It wouldn’t be hard. Maybe ride out on a float? They could easily pool their money together. Hold on....I’ll explain.

Those Ravens are PURPLE. Hello? That’s one of the Mardi Gras colors. And then there’s the 49ers. Their whole name came from the GOLD rush. Again, Mardi Gras color. And the field is GREEN. Viola! Just combine the three colors, slap some footballs all over it and give those dudes some throws. Catches? I need to ask Michele at Old Dog New Tits the correct term. She’s a NOLA native.

Speaking of Michele, we heard a rumor going around that not everyone LIKES to WATCH the ‘BIG GAME’... (gasp)...it’s true. Some people at your Super Bowl party are just there for the free cocktails and delicious spread you laid before them. I’m serious!

They’ll ONLY pop into the room during the anticipated new commercials, to watch Beyonce bop around stage at the half-time show and to offer a refill on drinks. All the while wishing that darn clock at the top of the screen would finally tick down to zero.

Are you one of THOSE people? Well, we have something for you, too! Come join Michele and Mel’s virtual Super Bowl spread on Twitter. There will be lots of beverages and enticing finger foods. And maybe Michele will bring us some King Cake...and beads...and cheese, of course. 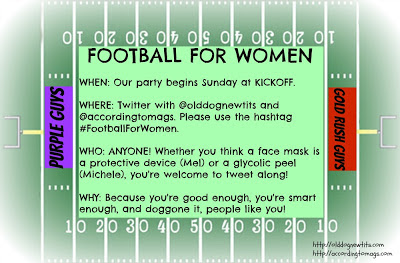 HOPE TO SEE YOU THERE!

WAAAAAAIT! JUST ONE MORE THING BEFORE YOU GO!

I'm in the running for this contest. I'd love any
help you could give. It's simple!

Also, Michele, from Old Dog New Tits is in there.
She's a funny lady. And I'm not just saying that
because she's my friend or because she paid me. I mean it!
You can vote every 24 hours and for as many people as you like.
Thanks!
Posted by According to Mags... at 3:50 PM