The Monster Inside My Head

Neurologist: "Check this out. It's pictures of your mom's brain. Isn't that interesting?"
Mags: "No way! That's gross!" 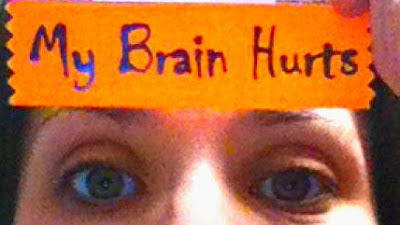 After my hysterectomy this summer, a change happened. Yes. Literally "the change" but also a change in my usual migraines. I've had them pretty much my whole life. I knew well the warm feeling over my face and the disruption in my peripheral vision that warned me it was about to hit. It was like one of those crime shows where they pixelated the person's face that didn't want to be seen. Except, for me, everything looked like that. However, after the surgery, my usual migraines that I would get monthly, turned into a completely different animal. Like, rip my eye out of my socket kind of animal. These new headaches lasted for days.

Just like the migraines that preceded these new multiple day horrors, they gave me an aura of sorts before they happened. They always came in the morning, right as I woke up. The tingling above my left eye and stuffy left nostril was my warning and then...BOOM! The pain was there within minutes. There was no "sleeping it off", no medicine to knock it out...it was just there...behind my left eye, back of my head and neck...FOR DAYS.

I have a decent pain tolerance, or so I've been told, but these things brought me to my knees simply from the days of unremitting pain that wore me down.

I imagined it was what a vampire felt like when his eyes were exposed to the sun (not the sparkly ones, the Bram Stoker ones). The only time I felt relief from the pain was when I slept in my makeshift crypt. Curtains were drawn, blankets were plentiful and the pillow cradled my pain. When I drifted off, I was thrown into stress dreams. You know, the dreams where you were running around a forest and couldn't find your way out while you were being chased by a mad killer. Needless to say, those days and nights were exhausting and stole my patience, my time and my sanity.

After months of these "lost days", I was sent to a neurologist. He and I went over my history and decided to try a daily preventative medication. In the meantime, I was sent to get an MRI...which was two hours in an extremely tight fitting, noisy chamber.

A few weeks later, I went back to the neurologist's office to get the results. He showed me all the pictures of my brain. My first thought was, "THERE'S REALLY ONE IN THERE! PHEW!" The first thing out of Tuck's mouth was, "It looks like a bunch of curvy roads for cars." Atta boy!

Everything was fine. The only thing that was noted were the white dots that showed up on the pictures. Apparently, severe headache sufferers often have white dots that show up on their scans or as my friend, Amanda, referred to it, "You have a polka dotted brain!" I loved that description so much more.

The doctor was happy to hear that the daily medication seemed to be working on holding off these monsters. He told me that I might have "break through headaches"... every once in a while one would come through. But they'd be less intense and shorter in length. Hey, that's better than four to eight days a month.

And yes, I've had a few since I started on the medication, and it sucked as usual. There's no tempering these suckers. But, I've really tried to focus on my hydration, food intake, stress level and exercise. In other words, I started taking time to take care of myself. And guess what?!? It's helped.

Who knew?
I know, Mom...you did. Good advice.
(Always listen to your mother.)