IT'S ALL ABOUT PRODUCT PLACEMENT

Once upon a time, there was a small boy at the tender age of five and three-quarters. He was shopping in Wegmans with his mom and baby sister where there were delicious treats as far as his four-foot-eye-level could see. The boy's mom always stopped by the bakery first so that he and his baby sister could choose a scrumptious cookie to devour and crumble throughout their shopping trip. Usually he got in the back of the cart so that he could concentrate on just the cookie, but today was different. His mom told him that they had a BIG list and she would need all the space in the cart she could get. He promised his sleep-deprived mom that he could handle walking AND eating the cookie at the same time.

As they left the bakery he noticed a lot of colorful boxes piled up in front of the fruit area, much like the large building boxes in his Kindergarten classroom. There were a multitude of colors and pictures all over the boxes.  Not to mention all the LETTERS AND WORDS! How exciting. He was a FANTASTIC reader. His teacher told him so. Only a few words stumped him.  The young boy locked his eyes on one particular box. It was brown and had a crazy looking dog on it. He giggled through the mass of cookie pieces in his mouth. The words above it were bigger than the ones he was used to in his readers. But, no word was impossible. His teacher and mom always told him it was just blending the sounds of the letters together. He couldn't wait to impress his mom and baby sister. He would sound out those big words confidently and LOUDLY. He could do it!

In his head he practiced. Then, he looked up, ready to share what he read. His mom was gathering some florets of broccoli as he tried to get her attention.

His mom smiled, turned quickly to acknowledge him, and said,

Then she went back to bagging up the produce. But he knew that wasn't going to be what would get her full attention. Once he read those big words, he knew she'd drop that bag of veggies in amazement. So, as loud as he could, he began with the first word.

He sure was right. His Mama swung around with a wild look and tried to stop him. But he knew what he was doing. It would be okay. She didn't need to help him. Just one more sound to go.

She was impressed, but she didn't say ANYTHING about the second word he had sounded out, so he repeated it nice and slow so that each letter could be heard LOUD AND CLEAR.. B-I-T-C-H.

His mom was SO proud that she was BEAMING bright red with pride. And guess what? All the other moms around were looking in awe, too. Everyone was impressed with how he read those big challenge words, right at his eye level.

Then the boy, his mom and baby sister made a pit stop by the Customer Service counter where the boy heard his mom talking about something called "product placement." 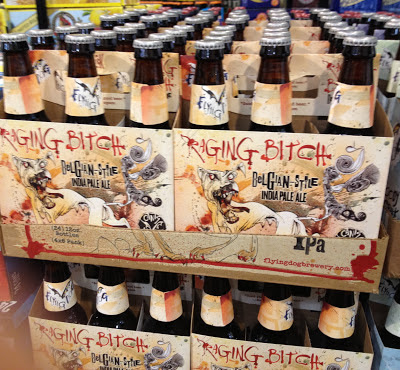 OF COURSE I did not tell my son this story, who is now seven and three-quarters. But I will tell him this story over our first beer together...
when he's old enough.