THE CALL OF THE WILD

Me: "It's birds talking to each other."
Tuck: "What are they saying?"
Me: "I don't know yet."
Tuck: "I bet they're talking about who can fly the fastest."

Today I learned something. Well, two things...okay...maybe three. For weeks now I've seen a woodpecker land on the same tree outside our kitchen window. It's always around the same time when she swoops in, does a dance around the tree and then flies off again. I've been trying to capture a picture, only to have her elude me time and time again.

But today was my lucky day. As I sat on our deck writing, I began to hear the familiar calls of the birds around our back wooded lot. It was really distracting, especially because some of the calls were so shrill and continuous. Then, something flew right over the top of my head. It was THE WOODPECKER! She landed on a tree close to me so I grabbed my camera from inside. I moved around the deck to get a better view and started snapping. 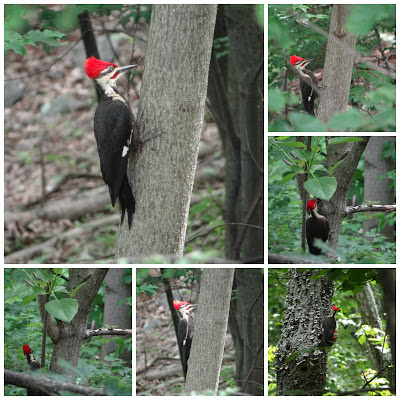 It took me a few tries, but I got her. Chris was watching the photo shoot and noticed something interesting.

"Look, I think there are other woodpeckers on that tree with her. Two others, in fact."

So, I aimed my lens and focused. Sure enough I did see two other heads popping around the tree! 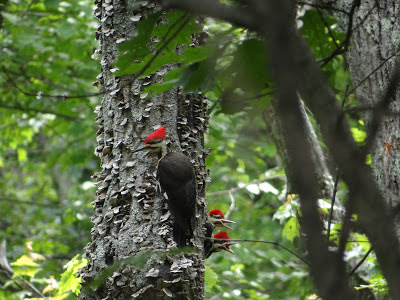 When she flew away, I realized that those two little heads were still popping out from behind the tree squawking away. That's when I realized...those were her babies! No wonder she has been devoted to that tree for months! I walked down to get a closer view and there they were, both babies, poking their Mohawked, red-heads out of a hole calling for their mama to bring them some lunch. 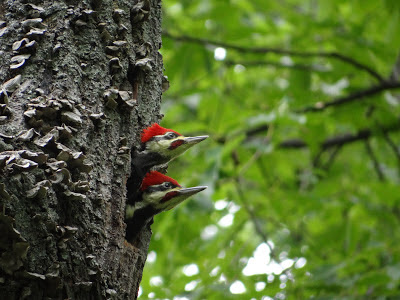 Countless times she'd come back, bringing them the bugs she pecked out of a nearby tree. Those two little creatures were insatiable. As soon as she'd fly away to get more goodies, they'd get on their calling kick again. I started to understand what was going on between them. They'd shriek and she'd ignore it for a little bit of time. Then, once the babes' calls got to a fevered pitch, she'd give them a quick chirp back to let them know she was on her way. Have a listen.

That didn't last long, though. The babies' patience was wearing thin waiting for more tasty morsels, as I'm sure their mom's was of their incessant calls. That's when I knew EXACTLY what was going on in that tree...