These words have become Tuck's mantra this summer break. "BREAK" being the keyword in that sentence. My poor guy. Everywhere he turns he's knocking into, onto, or over something. He's grown a lot in the past month and it's like he's not used to his new size yet. He literally trips over his own two feet. His legs are a line of bruises and scrapes. Sigh.

The day before we were leaving for our Boston trip, he was switching over the laundry from the washer and dryer. He had mastered it and was psyched to be "in charge" of that job. Next thing I heard was his now infamous mantra floating up the stairs along with Mags over top of it screaming,

"TUCKER JUST BUSTED THE PIPE IN THE LAUNDRY ROOM!"

Floods of soap bubbles danced through my head as I ran down the stairs asking,

I relaxed as soon as I heard.

"I'm fine, but I broke this pipe. I'm sorry." he said with tears welling up in his eyes and his bottom lip quivering.

After assuring him the only thing that mattered was that he wasn't hurt, I had him explain what happened.

Apparently, he had stepped off the stool at the washer machine (literally three inches off the floor) and lost his balance. He fell back into the air conditioner unit and snapped the PVC drain pipe in half. Water was dripping out slowly. No biggie. I ran upstairs, turned off the AC and grabbed my phone. It didn't take long to find someone to come fix it.

My poor little guy worried the whole time the repairman was there.  He kept asking,

Once everything was set and the repairman had left, Tuck relaxed. We played a game of UNO and sure enough, Tuck won. Watching him do his victory dance, I knew he was back on track.


Then he knocked over my coffee-filled cup and
I knew he was REALLY back on track. 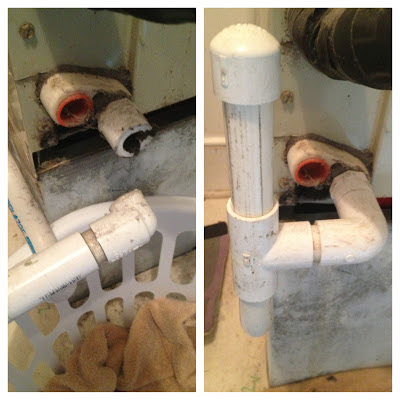